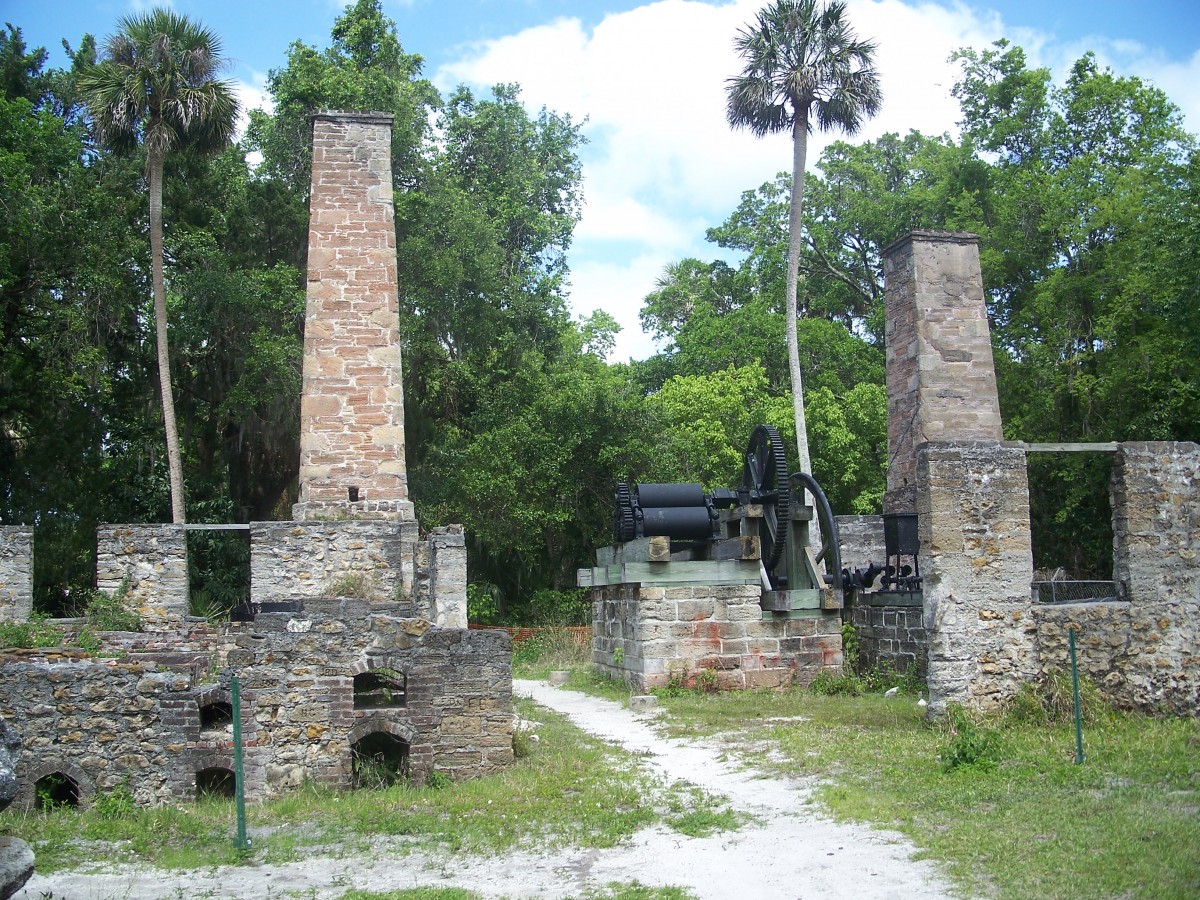 Dunlawton Sugar Mill Plantation’s history began before Florida became a state in 1845. Originally, Florida was divided and sold into large land grants and estates from Spain. The mill and gardens are located on a 12 acre portion of a 995 acre land grant awarded to Patrick Dean on August 31st 1804. Dean grew sugar cane, cotton, and rice, and possibly indigo. In 1818, he was reportedly killed by a renegade Indian or slave. The plantation eventually passed into the hands of John B. Bunch McGrady as an inheritance. He was an officer in the British Navy and had no interest in farming so he sold the land to Charles and Joseph Lawton for $3,000 dollars.

Sarah Petty Anderson (Dunn) inherited the 450 acre Tomoka Plantation (just north of Ormond) from her father. After her husband died in 1830, she and her sons sold the Tomoka property and used the proceeds to buy the Dean Plantation. They filed a fictitious name for the purchase combining her maiden name Dunn with the name Lawton creating the name Dunlawton Plantation. The price was $4,500, and was finalized on May 3rd, 1832. They produced sugar and molasses until December 1835, when the Second Seminole Indian War began.

During the War, 1835-1842, the mill was burned down. The Anderson family received no money after the war to help rebuild the mill so it was abandoned until John Marshall bought it on September 18, 1846. John Marshall rebuilt the plantation and it was again productive from 1849 until 1853. Several different managers failed to run it productively and it eventually returned to the Marshall family. It was burnt down again in 1856 during the Third Seminole Indian War. In 1862 it was a camp headquarters for the St. John Rangers during the Civil War. Throughout the war, the kettles were used for the production of salt for food preservation and ammunition. The property was finally sold to William Dougherty in 1871. Between 1871 until 1904 the property was divided and sold off in smaller lots.

It was a tourist site as early as 1939. It was mistakenly labeled as ruins of an old Spanish mission from the 1600s. In 1940s and 50s owner J. Saxton Lloyd created an amusement park called Bongoland. He commissioned Dr. “Manny” Lawrence to build the stone dinosaurs, and it also featured an Indian village, animals, a train to ride around the paths and a baboon named Bongo. Once Bongoland closed, the property sat neglected, before it was bequeathed to Volusia County in 1963.

In 1985 Martin Wittbold, a local nurseryman formed an organization, the Botanical Gardens of Volusia, Inc. They made an agreement with the county to lease the mill property in 1985, beginning a new life for the Dunlawton Sugar Mill Gardens. Our mission is to educate the local gardeners about what can grow in this area as well as create a beautiful place for visitors to enjoy while they explore the mill ruins.

We have created different gardens and plant collections to see including azaleas, camellias, ivies, magnolias, native plants, palms, and succulents, as well as an Asian garden, master gardener demonstration area, ferns, and tropical collections. Many of our features are projects done by Eagle Scouts and are recognized on our Project board at the front entrance. Some other interesting features are a children’s garden near the full size stone dinosaurs, a human sun dial and an herb garden shaped like Florida.