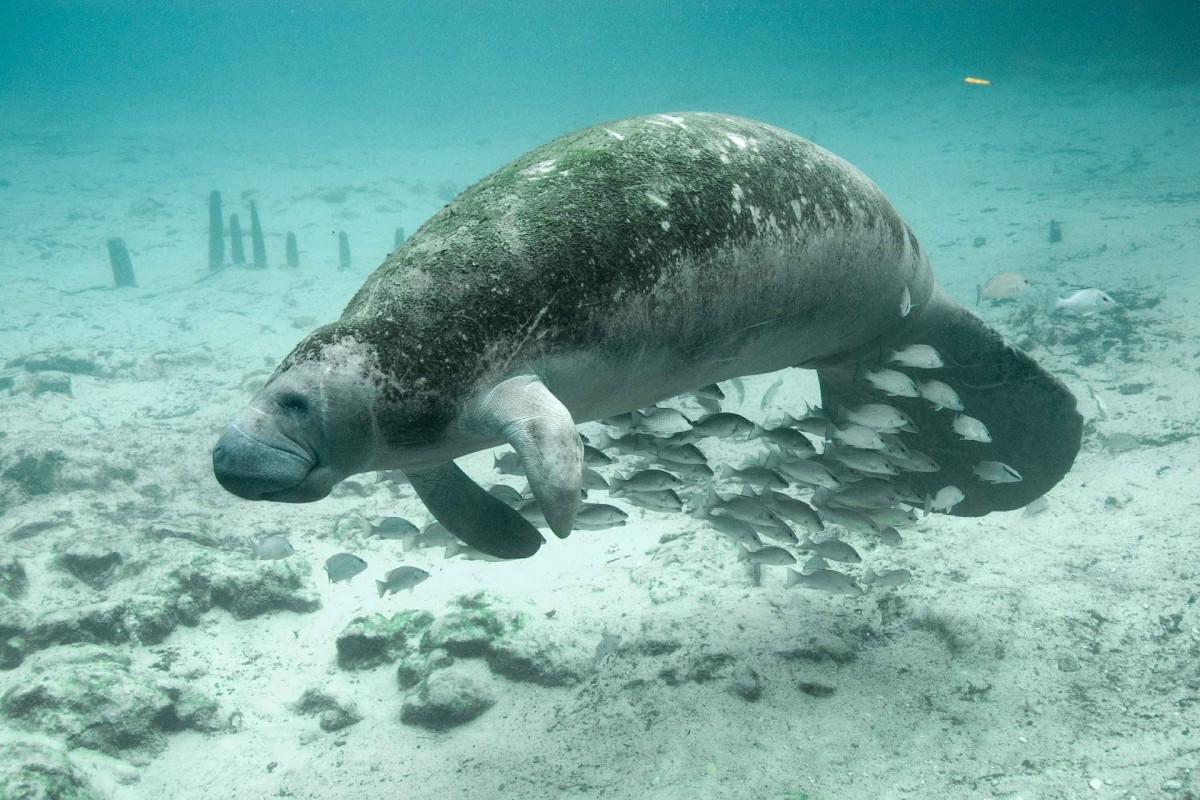 The Florida manatee, a subspecies of the West Indian manatee, is Florida’s official marine mammal. Its sausage-like body tapers to a flat, paddle-shaped tail. The upper part of its body has two flippers with three to four “fingernails” on each flipper. The head and face are wrinkled, and the snout has stiff whiskers

Manatees are sometimes called sea cows, and their languid pace lends merit to the comparison. However, despite their massive bulk, they are graceful swimmers in coastal waters and rivers. Powering themselves with their strong tails, manatees typically glide along at 5 miles (8 kilometers) an hour but can swim 15 miles (24 kilometers) an hour in short bursts.

Florida Manatees are usually seen alone, in pairs, or in small groups of a half dozen or fewer animals. From above the water’s surface, the animal’s nose and nostrils are often the only thing visible. Manatees never leave the water but, like all marine mammals, they must breathe air at the surface. A resting manatee can remain submerged for up to 15 minutes, but while swimming, it must surface every three or four minutes.

There are three species of manatee, distinguished primarily by where they live. One manatee population ranges along the North American east coast from Florida to Brazil. Other species inhabit the Amazon River and the west coast and rivers of Africa.

Manatees are born underwater. Mothers must help their calves to the surface so that they can take their first breath, but the infants can typically swim on their own only an hour later.

Manatee calves drink their mothers’ milk, but adults are voracious grazers. They eat water grasses, weeds, and algae—and lots of them. A manatee can eat a tenth of its own massive weight in just 24 hours.

Manatees are large, slow-moving animals that frequent coastal waters and rivers. These attributes make them vulnerable to hunters seeking their hides, oil, and bones. Manatee numbers declined throughout the last century, mostly because of hunting pressure. Today, manatees are endangered. Though protected by laws, they still face threats. The gentle beasts are often accidentally hit by motorboats in ever more crowded waters, and sometimes become entangled in fishing nets.