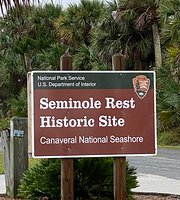 Looking for something cool to do? How about exploring Seminole Rest, an amazing prehistoric and
historical interpretive park in Oak Hill? This National Park Service treasure is home to several remarkably
preserved prehistoric shell mounds – dating back from 2000 BC to 1565 AD – and turn of the century
buildings that have also remained wonderfully preserved.
Indian shell mounds were often used for burial of prominent tribe members. Although no evidence of
burial remains have been discovered at Seminole Rest, research indicates that the shell mounds there
were used seasonally by the Timucuan and Ais Indians to gather and prepare clams, oysters, crabs and
fish to help sustain them for the year ahead. When Europeans arrived in the 1500s, they brought disease
that wiped out the Timucuan and Ais tribes.
Later, this particular land that was once inhabited by the Timucuan and Ais Indians was divided into lots,
one of which was the Oak Hill Post Office. The rest of the land was sold to two prominent, local families
– the Tumors and the Snyders. With the coming of the railroad and the burgeoning citrus industry during
the 1870s and 1880s, most of the other shell mounds along the East Coast were dismantled and used for
construction materials for roads. Yet the Tumors and Snyders refused to sell…the primary reason the
structures on this property remain almost completely intact.
After the Civil War, Oak Hill became a permanent settlement used for harvesting live oaks to build ships.
The shell mounds there were originally given the same moniker, but the land they rest upon has now
become known as Seminole Rest.
Seminole Rest is open seven days a week from sunrise to sunset.